An Odd Love Letter to My Grandmother

It's been a long time since I posted. Life happened; you know how it goes...

Three years ago, I found an ugly and beat-up bookcase at a flea market. The guy's child had attempted to remove some of the paint with a powerwasher, resulting in some pretty bad gouging in the wood. It was a mess. We paid $25 for it, and then it sat on our sunporch waiting for me to refinish it.

I knew exactly what I wanted to do with it: I wanted to paint it to resemble the designs on my paternal grandmother's recipe box, I just needed the time and the goose to do it. Mostly, I got tired of looking at it on the sunporch.

It involved more scraping, a lot of sanding, more scraping, and finally coming to the realization that I was never going to get all the old paint off without chemical stripper. Since I was going to paint it anyway, there really didn't seem to be the need to go to that kind of effort, plus I hate that stuff. 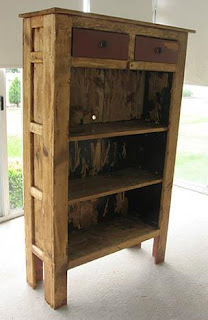 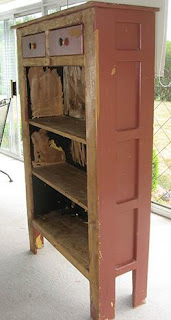 I filled the worst of the gouges with wood filler, since some of them were on shelves, and I wanted cookbooks not to catch in those gouges, and had to sand those after they dried. After several coats of primer, spray paint for the interior, and several coats of paint for the exterior, I had a white and blue bookcase that looked nothing like it did before.

I then used Photoshop to resize and modify the motifs from her recipe box. Well, sort of hers... Mamaw's recipe box is well-used, and not in pristine condition. I love the design, and had another just like it and scanned it to get the images I needed. I also found a tray on Etsy that Ohio Art made to go with it, because it was apparently a very popular design with several accessories. (Mom even found a watering can for me.)

Here's my inspiration for the motifs that I painted into the insets on the sides, and on the drawers: 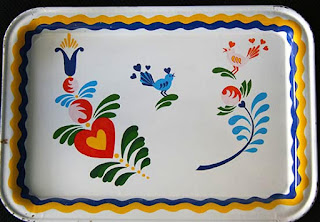 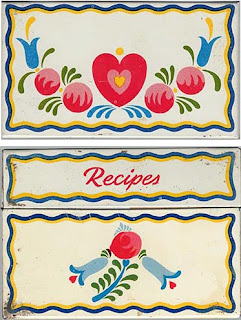 I measured each of the insets and the drawers, figured out which motifs I was going to use, and then used Photoshop's "find edges" command so I wasn't printing full color images of what I resized. I then traced those onto tracing paper, and applied the images to the bookcase with graphite paper. I held the tracing and graphite paper on with painter's tape, so the design didn't shift while I was tracing it. The blue bird on the tray above was my fourth motif; to make it I just reversed the pink bird's branch, and swapped the blue one in. The heart from the box lid (left, top image), had to be reduced and squished down a little to make it fit on the round knob. It's also elevated in position on the drawer, in order to get the size I wanted on the drawer without the tulip running off the edge. (Easier to see, below.)

And here is my finished love letter to Mamaw: 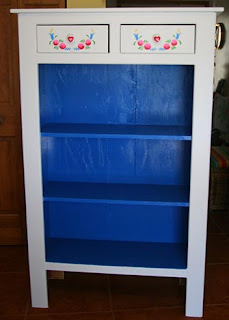 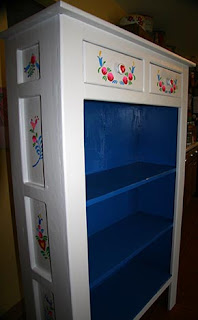 Some transformation! I'm incredibly proud of that. With the paint and other materials, it ended up costing more than $25, of course, but I have something that is a giant reminder of my grandmother, that is a functional piece of furniture that goes with my kitchen, and is sturdier shelving for my heavy cookbook collection than the baker's rack I was using (that was starting to lean under the weight -- yikes!).

I suppose what I hope you'll take away from this is the inspiration that your family recipes are more than just the meals. It's the history, and the memories of the people. I feel so very privileged to be The Keeper of the Box. How you honor the memories of those who came before is up to you, but don't limit yourself to cookbooks. Inspiration is everywhere.

By the way, if you're hyper-organized, and have a cooperative family, there is time to get a family cookbook put together in time for the holidays. You might make yourself a little nutty, but you can do it! I put ours together starting in October, and had them done by Christmas. (That was 15 years ago, probably time for a new one!)